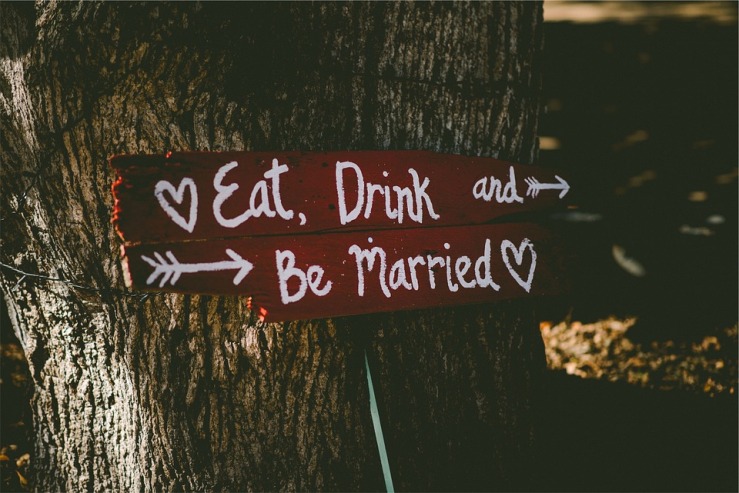 On the 27th of May in the Year of our Most Gracious Lord Two-thousand and sixteen, I and my long-time girlfriend did the deed of legality and finally got married. We got hitched. We attached balls and chains to each other. We stopped living in the sin of fornication.

Now, when I say “long-time girlfriend”, I’m not just whistling Dixie. Sixteen years long-time. A decade and a half plus change long-time. Practically a third of our lives long-time. That in itself is a major commitment.

The chain of events on how we finally put pen to paper should be expounded upon, as it serves for a laugh. (For those of our intimates, the story is very emblematic of who we are.)

My wife had been out of work for a year and a half. She finally found a position at a nursing/rehab facility. She had a week before she started, so I took off a few days to celebrate with her.

One of the things she loves to do is to go to the Camarillo outlet mall. Obviously, spending had been tight while we had only one income, so it was time to splurge a bit. As we were looking at the mall’s website, we both noticed that there was a Zale’s outlet store there. “Well, look at that,” she said. “Yes, indeed, look at that,” I replied.

Where do we hit first the following day? Yes, of course. Within an hour she had chosen a beautiful engagement ring.

However, I never actually said the words “Will you marry me”. Didn’t get down on one knee, didn’t have mariachis backing me up, didn’t even play “In Your Eyes”. I mean, sure, we’d been together 16 years. Formalities had fled long ago. But still, I could have at least looked longingly into her eyes.

How did the world find out that we were affianced? I texted my friends and family with a picture of the ring on her finger, she posted a change in relationship status on Facebook. Oh, and of course, I tweeted. Modern love indeed.

Of course, once one gets engaged, the immediate question is “When’s the big day?” It was almost as if people didn’t know who we were.

I was the one who wanted a biggish wedding. My now wife is a very shy person, and the thought of getting up in front of a bunch of people—even people whom we love and love us back—gave her no shortage of tsouris. This is somewhat of a drawback when wanting a full public spectacle. So, we waited.

Eventually, this year, we started to get serious about setting a date. Since her sister and father live in Indiana, we had to plan things around when they could come out. I had given up on thoughts of a grand wedding, as, both of us being in our mid-40s, we realized (OK, she made me realize) that going into debt to merely formalize something which had been fact for almost two decades was a bit silly. After to-ing and fro-ing, we settled on a date for her family to come out, and we decided on a simple courtroom ceremony: me, her, my now-sister-and-father-in-law, my mother, and my best friend. The following day we had a huge dinner at the Cuban social club my aunt and uncle run, and boom, it was done. We should have both changed our names to Mr. and Mrs. No-frills.

One would think that having been together 16 years, nothing much would have changed by merely obtaining a piece of paper. But the vagaries of human love don’t work that way.

I’m not going to say everything changes. But things do change.

Par example: One day Teresa was sick to her stomach, to the point where I took her to the emergency room to get a shot for the nausea. Of course, I stayed with her the rest of that day. Once her stomach felt stronger, I took her out to a diner we hadn’t visited in years. Out of nowhere, I said “We’re in love again, aren’t we.” And she agreed.

Little things like that. Little realizations that we’re not what we once were, that we’ve become something different. At the start of our relationship we went out with my best friend, and she asserted “Oh, he doesn’t believe in bourgeois concepts like marriage”. And at the time, I didn’t. But I do now. Not because I’ve become conservative and am planning a vote for Donald Trump. But because as I’ve grown older I’ve come to appreciate the value in the rituals which have undergirded our human civilization. It’s why I thought gays should have the right to marry long before it became fashionable; the committed couple joining—ostensibly for life—is one of the cornerstones of our culture. Why should they be denied that which I eschewed for so long?

No, I am far from a conservative. Read here for evidence of that. But neither am I a radical. I don’t desire a sharp break with the past. Just as I consider myself an agnostic Catholic, informed by my religious upbringing (the subject of a future piece), so do I take solace in things which went before which still resonate with me. I look side-eyed at anyone who says “We need to smash up everything!” That person is either immature, or has nothing to lose, or won’t suffer much in the chaos. He is a person to be avoided.

My first quarter report is this: the young man who thought he’d be a swinging dick for all his life is now settled into comfortable middle-aged marriage. And that’s not a bad thing. In fact, it’s quite good. There’s a warm familiarity to it, a blessed comfort. And it is different, for we have made a public, legal commitment to each other. Of course, we can divorce. But that seems a much more drastic step than merely breaking up, as it would have been before the marriage. There’s an incentive to work things out in marriage which may not have quite obtained when we were merely living together. We feel, in fact, a little bit more adult. We now live in a slightly stranger country, but full of new wonders to discover.

4 thoughts on “On Marriage: A Quarterly Report”